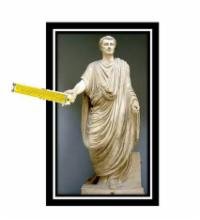 Nimes (Nemausus back then) was a large and wealthy Roman city of about 50,000 smack in the middle of the Via Domitia, the first Roman road built in Gaul (France).  It linked Italy and Hispania (Spain) across southern France.  Because of its location, location, location, Nimes was growing faster than the water source could supply.  And then there was the commitment Julius Caesar made to the veterans of his Nile campaign:  plots of land to cultivate on the plains of Nimes.  Good news:  here’s you land; bad news:  ummm…there’s no water.

The Romans used infrastructure (roads, bridges, and water supply) to “Romanize” new territories.  But the water supply was most critical.  We humans can survive just fine without getting to the other side of the river, but we absolutely cannot do without water.  We can’t survive without air either, but that’s a little easier to find.

The Chief  Engineer dispatched his hydrogeologists to search for a clean and productive water source.  The terrain to the east and south of Nimes was fairly flat (even to this day, water does not flow uphill).  To the west was the Massif Central, a mountainous region consisting mostly of granite, several hundred extinct volcanoes, and mountains over 6000 feet.  The hydrogeologists did find springs north of Nimes.  The nearest and best suitable spring was at Uzes.  It was excellent—and only 12 miles as the crow flies.  HOWEVER, that darned Massif Central was in between.  But the Romans didn’t like to drill tunnels!

What to do?  Well, they were in the middle of nowhere, failure was not an option, and they couldn’t move Nemausus.  The solution:  Go around Massif Central.  This added nearly 20 miles to their route—a long and winding aqueduct.  They had to cross the Gardon River.  Along the entire route, they didn’t have a whole lot of elevation change to play with.  But they figured out how to do it.  No slide rules.  No GPS.

I’ll spare you the geeky engineering details, but Wikipedia has some amazing images and technical details on the Pont du Gard and on the Nimes Aqueduct.  You’ll also find out how clever the Romans were in their design and construction.  They cut the stones precisely, so they wouldn’t have to use mortar; they numbered them, so the builders would know the exact location; and they left some stones protruding, so they could build scaffolding to maintain the bridge.  By the way, no one even attempted to build any infrastructure through the Massif Central until the construction of the A75 in 2010—i.e., it remained unconquered for 2000 years!

You’ll remember from your history classes that the the Roman Empire fell in 472, attacked by the barbarians from the north.  I always remember stuff about barbarians.  But the Pont du Gard survived.  In later centuries, it was used as a bridge.  It became a UNESCO World Heritage Site in 1985.  Now the Pont du Gard is one of the top tourist destinations in France, drawing over a million visitors every year.

As I was putting this webinar together, I kept thinking about the Seven Wonders of the World.  You remember them:  Pyramids at Giza, Mausoleum at Halicarnassus, Colossus of Rhodes, Hanging Gardens of Babylon, Statue of Zeus on Mt. Olympus, Temple of Artemis at Ephesus, and the Lighthouse of Alexandria.  Of the seven, only one (Lighthouse of Alexandria) served a practical purpose.  The others honored gods or rulers.  And only one still stands:  the Pyramids at Giza.

The Romans probably thought all they were doing was to build something to provide a basic human need:  getting water to 50,000 people—the most practical of all purposes.  Who knows if their intention was to have it standing 2000 years later?  But they built it so well and so beautifully that it now brings people together to celebrate.  I think friendship is a basic human need, too.  Pont du Gard brought all of us—engineers and non-engineers—together on the webinar, including our friends across the world.  That’s friendship!  I have an extra-special reminder:  Our Aussie friends, Jeannette & Ken Couts, snapped this photo.

A Contest for Engineering Firms!!

Why Sweat It? What is “eccrine” and why should we care about it? The eccrine…