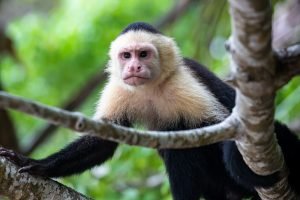 How did we end up with minimal hair and maximum eccrine glands? I hate to bring this up, but it was climate change. Climate change made us human! Around three million years ago, global cooling had a drying effect in East and Central Africa, where our human ancestors lived. Regular rainfall declined, and what used to be wooded environments gave way to open savanna grasslands. The foods that our ancestors the australopithecines subsisted on—fruits, leaves, tubers and seeds—became scarcer, as did permanent sources of fresh water. So our forbearers had to up their activity level and travel greater distances just to stay hydrated and obtain enough calories. It might seem counterintuitive, but even though their environment was cooler, they were in danger of overheating because they had to run and walk more. Eccrine glands to the rescue!

And then the next cool thing (pun intended): because of our sweat and our lack of fur, it was possible for the dramatic enlargement of our most temperature-sensitive organ, the brain. Whereas the australopithecines had a brain that was about 400 cubic centimeters—roughly the size of a chimp’s brain—our next ancestor, Homo ergaster, had a brain twice that large. And within a million years the human brain swelled an additional 400 cubic centimeters, reaching its modern size. Our larger brains allowed us to develop language. Spelling depends on language, and we need our large brains to understand and remember all those spelling words!

You can read the entire Scientific American article here:
https://www.scientificamerican.com/article/the-naked-truth/

How to Meditate (or at least how I meditate)

The Janus Questions Last year around this time, my colleague Anna Sicalides shared a very…